The Story Analyst: Eat Of My Flesh, Drink Of My Blood

Okay, if The Walking Dead would stop handing out such great opportunities to discuss storytelling I could stop mentioning the show. So stop it already. (No, please don’t, I didn’t mean it, don’t be angry AMC, just keep batting em out of the park).

Check this out (not actually a video, just a sad screen grab):

Maybe a quick recap first. Picture it: it’s Season 5, Episode 3 (Four Walls And A Roof). The group is holed up at Father Gabriel’s church, which by the way is called St. Sarah (Sara the Black), who is the Romani patron saint of gypsies. Sainte Sarah, who by some accounts stood on the shores of Gaul (France) to await and welcome a boatload of holy refugees of early Christian persecution. Which is why I love this show so much. Isn’t that just so perfect?

So one night Bob steps out for some fresh air and a little manly crying jag when the surviving cannibals from Terminus set upon him. He wakes up groggy in their encampment and is subjected to some loony-tunes hectoring by the icky Gareth. Seems they’ve got themselves a good old fashioned spit-turned open-pit barbeque going on. The lip-smacking, the slurping, the greasy chins, the sinewy strings of pink meat, the chewing. Oh, the chewing. The chewing and slurping and smacking. Seems Bob’s their guest of honor. Slowly, we – and poor Bob – realize how hard it is to come upon any meat other than squirrel and snake in these post-zombification days of apocalypse. Plus, Bob’s leg is missing below the knee. Yep, that ain’t no leg of lamb sizzling and crackling on the fire. FF a bit, hahaha, Bob reveals he’s been bitten and they’ve just eaten infected meat. Idiots! Commence projectile vomiting. Oh, and also the Termites throw up. Welp, that sure oughtta take care of that.

So what’s all this recapping and crazy talk getting to? The screen grab above happens when Bob is returned to the group and ultimately dies. Tyreese spares his sister from having to posthumously rearrange Bob’s grey matter with a hunting knife by doing the deed himself. He has just pulled the knife away when this moment blips by on the screen. 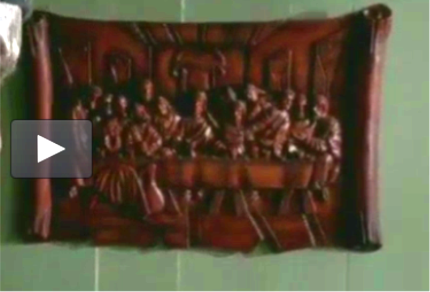 That’s a wood-carved plaque of The Last Supper. The Last Supper. I mean, come on people, Tyreese isn’t even centered in the frame! That’s no art-house film technique. He’s nose-to-nose with it. You’re meant to see that plaque. Now, why is this prominently displayed at precisely this moment? Why not a simple crucifix, or a nice little annunciation scene? Why The Last Supper?

Because of what happens at the Last Supper. Christ prepares the disciples for the end by introducing the symbolism of the Eucharist and performing the first communion. Eat of my flesh, drink of my blood. He warns of a betrayer in their midst, and predicts the denial by Peter. This very night, before the rooster crows, you will disown me three times.

Now, I haven’t gone through the episode with a fine tooth comb, but I counted at least three times that Maggie “denied”. Once, when she picked up the bible on the pew, looked at it with disinterest, and set it down again, thus signalling the denial of her family’s previously deep faith. Then after the Termite slaughter when Father Gabriel surveys the gore and cries, “But this is the Lord’s house !”, Maggie flatly says, “No. It’s just four walls and a roof”, as an overt denial of the sacred. Then again, when Abe Ford and his crew start for Washington rather than put Eugene at risk, Maggie along with Glen both agree to leave with them, to abandon – to deny – their survivor family. No wonder, when you look at the absolute horror on their faces during the Termite extermination. Three types of denial, and it’s still night.

In the previous episode, the gang partakes of the church’s sacramental wine. Drink of my blood. In this episode, the sacramental bread is partaken of by the Termites. Eat of my flesh. (Oh, the chewing and slurping and smacking.)

This apocalyptic world is an inversion of that biblical metaphor. It’s a perversion. On some levels it even harkens to social theory about civilization and its fall to barbarism in the presence of irremediable human hubris. But that’s a post for another time.

It is not an accident that all this is also linked to the slaughter of the Termites at the altar of Father Gabriel’s church. The Last Supper was a Passover meal, which required the offering of a lamb in thanks for delivering the Hebrews out of Egypt. Remember that the Hebrews at the time were told to mark their doors with the blood of the sacrificed lamb so that their households would be spared from the Angel of Death, sent by God to punish the Pharaoh and his people for refusing to let the Hebrew slaves go. The letter A had been written, presumably by the Termites, in blood by the door of the church.

And so it happens that the group is indeed spared, because Rick and his squad return unexpectedly and proceed to ex-terminate the Termites. But like the Hebrews, once delivered, we are left to wonder if they too will be cast adrift in the wilderness after proving time and again that they don’t yet deserve the Promised Land. We see this through Maggie’s and Glen’s horrified reactions to – and lack of participation in – the savagery.

With the addition of one innocuous item of art, the writers are telling viewers a whole lot more about what’s happening to survivors of this apocalypse. It’s both warning and hint at the conditions that took the sacred and the divine out of the equation, and thus brought about an onslaught straight from hell. Whether it’s nuclear power, where mankind has finally discovered a way to do to itself what only God could do before – wipe out every living thing – or whether it’s fictionally tampering with the human genome and unwittingly unleashing a zombie virus, our distance from God, the sacred, the divine, has never been greater. We drink of our own metaphorical blood, and eat of our own flesh, and therefore no longer participate in the divine (communion).When humans supplant God, we become monstrous, and the Promised Land remains farther and farther beyond our reach.

The show’s subtle allusions to Nazism and communism are not without reason either. These have been our greatest historical examples of what happens when humanity supplants God in trying to create a Promised Land.

In storytelling, these are the little details that seed a plot with richness and depth. Even if an audience doesn’t consciously pick up on that plaque hanging there on the wall, it certainly will be taken in, somewhere deep in the subconscious brain. And that subconscious brain has a few cells set aside for all the information our vast circuitry has ever absorbed about The Last Supper, which are then set aflutter by the un/conscious perception of that plaque.

Just from that plaque. The writers are signalling and signifying with well-placed visual cues like this.

Add to that the expression in Daryl’s eyes (that too could be a whole post on its own) at the end of the episode and all your spidey senses should be left tingling: is he the betrayer? Or has he brought the betrayer into their midst?

Now that I think of it, Carol has been behaving strangely. And what was she doing back at the prison anyhow after the Governor ambushed the group, when she knew she would not be welcome? What would we have found out about her activities during her absence if the battle with the Governor had not forced the group from the prison? What was her purpose in being there? Had she been sent by someone? She’d already crossed a line by pre-emptively killing two sick but very much living members of the group, so there’s no telling how this bent in her personality was further warped by isolation and segregation from the only semblance of family she had left. And once they’d all settled into Father Gabriel’s church, you know when Carol found that car on the side of the road that she was going to leave on her own (or meet up with someone else?), and was about to just when Daryl grabbed her to chase down the car that took Beth.

Did she have something to do with Beth’s disappearance? Or that awful, freighted look in Daryl’s eyes when Michonne realized it was him coming through the woods and he glanced back toward the darkness in the trees and told someone to come on out? Is that expression evidence that Daryl – and thus everyone – has been betrayed by Carol?

Writers who use symbolism, metaphor, and recurring motifs can trigger profound subconscious emotional or psychological responses in readers that can keep them turning the page or watching episode after episode for reasons they might not even perceive. But in order to work, they have to be universally understood, or at the very least understanding must be attainable through the story’s context (in other words, never assume they’re going to pause, research it, then return to the story).

For example, a dove suggests something very different from the vulture, or the peacock. In exactly zero ways can you successfully write a horror story involving a dove as the symbol of malevolence unless you intend to be funny or satirical or ironic. Doves in horror will be the first thing to die.

Oh, and hey – guess how many survivors there are left from the battle at the prison?

This is conscious, deliberate storytelling with strokes of genius.

Think about it this way: you can throw a slab of meat on the barbie (sorry, I have to go there, I really do), and yes, it will be tasty all on its own with all that fat dripping down, juices flowing.

But a great master barbequer knows that a particular kind of wood and a hint of very specific herbs and spices depending on the meat – but not so much to overwhelm all that sizzling and crackling barbeque deliciousness – makes the meal oh-so-much more satisfying.

This site uses Akismet to reduce spam. Learn how your comment data is processed.